7 ways to fail at NPS Survey

Recently, I received an NPS survey 15 minutes after I bought the product!

I haven’t even used it yet!

I don’t even know how useful it’d be for me! It might be a great product, but I don’t know it yet.

So, 15 minutes after the purchase is certainly NOT the RIGHT TIME to send an NPS survey!

And there have been many such instances where companies make major mistakes while sending NPS surveys. While everyone talks about what to do when sending an NPS survey, I thought let’s talk about WHAT NOT TO DO!

So one day on Twitter, I asked my fellow CX Leaders in the CXQOTD –

“In your experience, where have you seen the worst NPS survey designs?”

Jeremy Watkin, Director of CX and Support at NumberBarn introduced #CXQOTD ( CX question of the day) on Twitter, where he’d ask a CX question every day. CX experts around the world answer that and share their expertise and experience around it.

To know more, all you need to do is follow #CXQOTD.

Several remarkable DONTs were shared and we picked the top 7.

1. NPS is not TRANSACTIONAL. Period.

NPS Survey is not a transactional survey. Don’t treat it like one.

Here’s one of the worst NPS survey examples. (Won’t name the brand here, so let’s take it as ABC.)

I just called ABC’s Support and had a great experience. They sent me an NPS survey and I chose 9.

After 4 days, again I called ABC’s Support and had the worst experience. Now, in the NPS survey, I chose 3.

Now, what will ABC’s CX team get out of it? And importantly, what is my loyalty towards ABC?

That is why sending an NPS survey after a support interaction isn’t ideal. Instead, send a CSAT or CES question.

A similar instance was shared by Aileen Day, CCXP, Value-Driven Brand owner and podcaster, when instead of a CES or CSAT survey, an NPS survey was shared with her.

“I especially enjoyed getting an automated NPS survey via email barely minutes after canceling a telecommunications service due to abhorrent service and even worse support. #CXQOTD” You don’t need a 20-question survey to get the outcomes you need.

You need a maximum of 2-5 questions.

So before launching a survey, do this –

And not just NPS, this goes for all surveys.

Here’s another one of the worst NPS survey examples.

“A certain rental car company sent a 20-minute survey to me. They wanted me to NPS everything from my drop-off experience to the agent’s friendliness. And yes, I just used NPS as a verb. There were so many survey questions about the poor agent that I felt like I was writing a performance review. Sadly, it will probably be used that way.”

Multiple NPS survey questions for each key driver! This happens a lot. Make it simpler!

Here’s one example of it – You don’t want to annoy your customer. Instead, keep your survey clean and the messaging clear.

3. There is a thing called the FOLLOW-UP question.

While everyone focuses on quantitative measurement, it’s time to go beyond that! That’s where the gold is. That’s how you’ll improve NPS.

The man who needs no introduction, Shep Hyken, shared some really good points about it. Knowing your customer would or wouldn’t recommend you is not enough. You need to know the WHY behind their answer to improve NPS!

You are the ONE for your customer.

You may be from the marketing, support, CX, or tech team. You may sit in India, Australia, the US, or the UK. But for the customer, you are one brand. And they don’t care about any of this.

All they care about is the product or service you (as a brand) provide to them.

“A car company had my (under warranty) car in for repairs. It had taken 2 MONTHS to source a part. I had no car during this time, and the sales team had the gall to call me with an NPS survey but refused to accept my response because the score was related to the service team.

Oh, it gets even better.

2 weeks later (still no car) the salesperson called me to wish me a happy birthday (must’ve had a CRM prompt), totally unaware of the survey call or that my car was still out of commission. Needless to say, I was a little grumpy. Silo disaster of note! #CXQOTD” 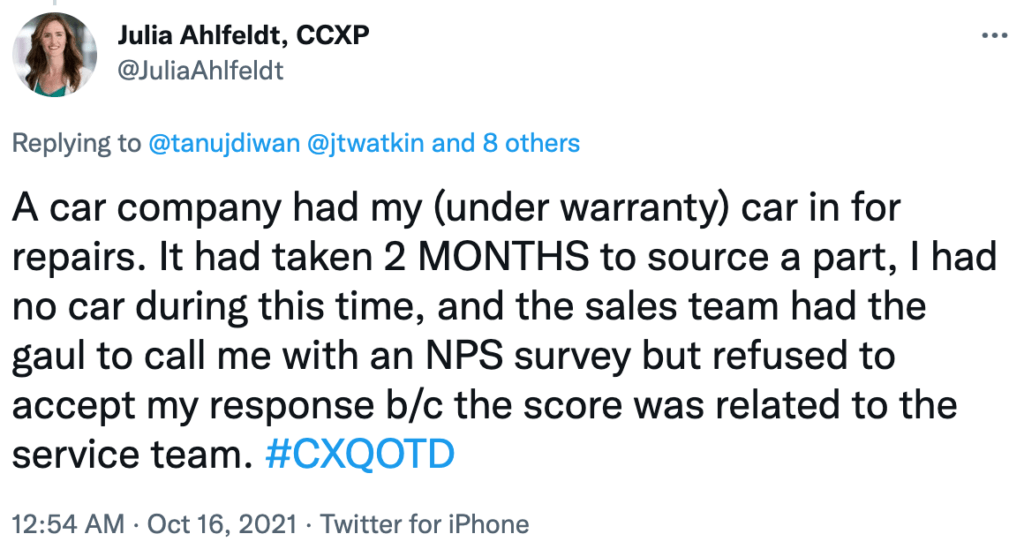 So, create a common channel, maybe slack/CRM or anything where all the team collaborates and engages with the customer as ONE. 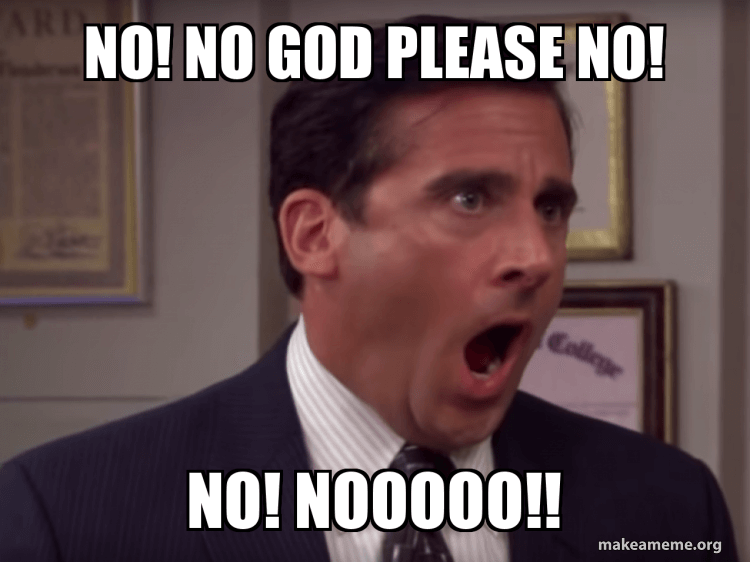 Flip scales are reversed NPS survey scales. Instead of 0-10, they show 10-0 scores.

Some brands flip their scales to get BIASED feedback.

But NPS is not about the numbers. It’s about WHY you got those numbers!

Even if you flip the NPS survey scale and get the majority of promoters and you still don’t act on their feedback, then this trick may work for you once or twice but not anymore.

Your customers will stop responding to you and eventually leave you.

“For a leading online fashion retailer in the EU, I recently saw the survey where the NPS scale starts from 10-0, I am very curious why they do this?” 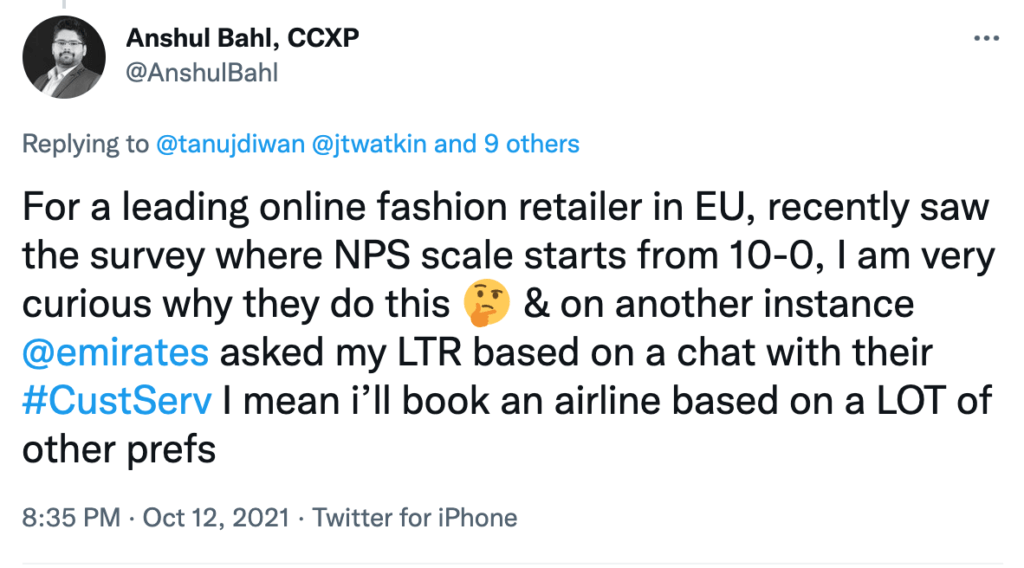 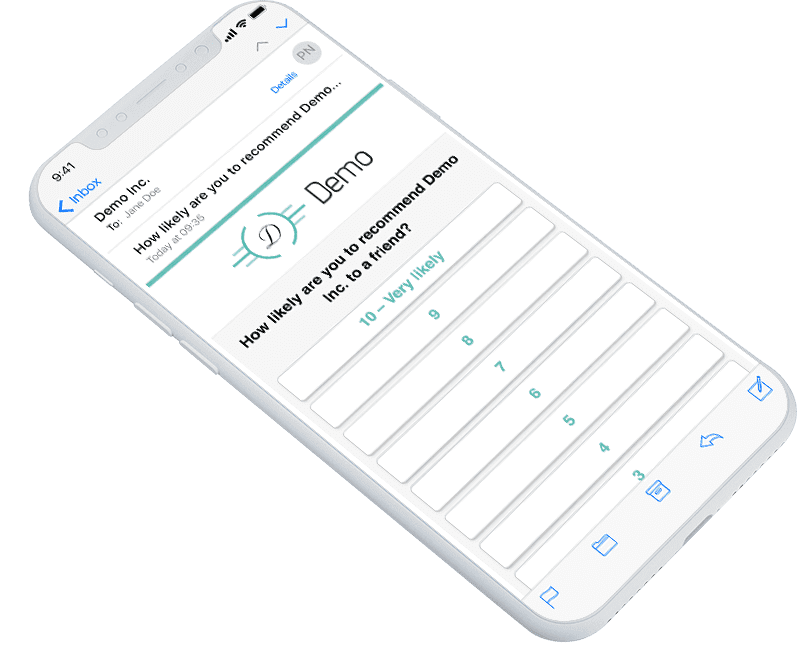 10-0 is all about making the NPS biased for people. You will certainly get higher scores!

And the team that owns the feedback program is on the right path of fooling the management! 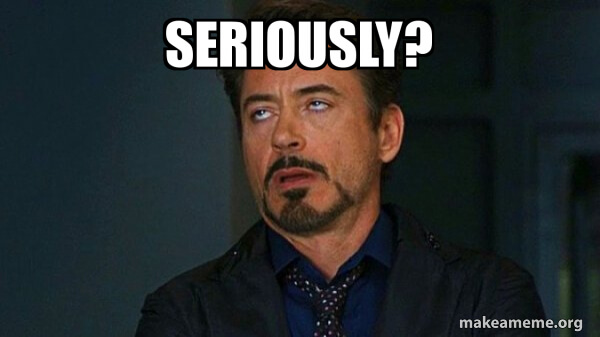 This has happened with everybody once. Even me!

I had set the expiry date of the survey to 15 days but forgot to mention it in the email. And when customers opened the email, the link wasn’t working! 🙁

“I can’t remember the company’s name but once I got an email to take a survey. I clicked on the link and the link didn’t work. That was probably the worst. Oops!”

That’s why always recheck your emails before sending them or mention the expiry date in the email.

7. Short and clear NPS surveys will take you places. Promise!

Keep yourself in your customers’ shoes and imagine someone asking for your feedback like this!

Would you spend so much time on it?

“Sharing this inbox gem that arrived just in time for today’s #CXQOTD. I don’t even know if this is an #NPS survey, but the invitation to complete it is so bad, I’ll never know.” Instead, make a clear, short, and direct email asking for feedback on the survey containing 2-5 questions that shouldn’t take more than 2-3 minutes.

And lastly, do this or go home – Close the Loop

There is no point in collecting all the customer feedback if you are not planning to act on it.

This annoys the customers the most.

So, always make it a point to take action on their feedback and let them know about it. Always remember, you are on DATE with them. 😉

Here’s a list of top NPS tools that can help you achieve the same.

Why SurveySensum is the best Google Form Alternative?