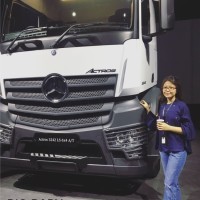 What is a Good Net Promoter Score?

What is a Good Net Promoter Score?

Net Promoter Score is a standard customer experience metric that enables businesses to gauge their customer retention and loyalty. In simpler terms, the metric measures the willingness of the customers to recommend your brand to their family or friend by asking a simple question –

→ How likely are you to recommend us to a family or friend?

This question is answered on an 11-point rating scale, ranging from 0 (not at all likely) to 10 (extremely likely). The respondents to these questions are divided into three categories called Promoters, Passives, and Detractors (which we will discuss later) based on their responses.

But is your NPS good or bad?

Let’s get into it.

To understand whether an NPS® score is good or bad, we must first understand how it is calculated.

Before we dive into the specifics of NPS® calculation, you must know that NPS® is an absolute number that lies between -100 to 100. It is not a percentage as is the case with most KPIs and business metrics.

1. Promoters are customers who have given a score of 9 or 10. You can count on these customers as those with high lifetime value and those who will remain loyal to the business for the foreseeable future.

Also, they are highly likely to act as mouthpieces for Word of Mouth marketing for your business.

2. Passives are customers who have given a score of 7 or 8. They are currently loyal to the brand but are at a high risk of churning. Their loyalty is fickle and hence can be easily lured by competitors with better pricing, features, or even a single negative experience from your business.

Passive customers are less likely to refer new customers to your business.

They are also on the verge of churning and have most probably been subject to negative customer experiences in the past.

Now that we know what promoters, passives, and detractors are, let’s calculate the NPS Score.

The NPS® score is calculated as a difference of % of promoters and detractors.

Let’s take the below example to understand NPS® calculation.

In this case, the net promoter score calculation would be

However, our final NPS score would be +15.

NPS® is an absolute number and not a percentage. As a result, a ‘%’ will not be appended to the NPS® score.

That brings us to the question — do NPS® scores remain constant from industry to industry? Are there NPS benchmarks that businesses can measure themselves against? Turns out, yes.

Studies have been conducted to benchmark the prevailing NPS® scores in each industry. 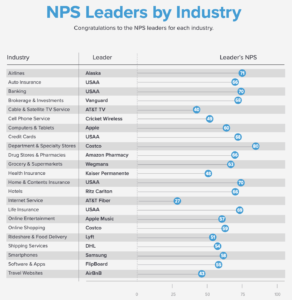 The average NPS® score fluctuates from industry to industry due to the customer expectations, service standards, and competition existing in the industry.

Now, this brings us to the big question. What is a good Net promoter score®?

What is a good Net promoter score®?

As a thumb rule, if the NPS score is less than 0, it is a cause for worry. A positive NPS gives some level of comfort.

If your NPS score is equal to or more than the industry average, it indicates that your customers are loyal and are willing to refer to new customers as well.

A negative NPS score indicates that there are more customers who would not only refrain from referring new prospects to your business but also might spread negativity.

A positive NPS can be considered good news only if it is above the industry average. But, the underlying point is, that there are competitors who are doing better than you at winning customer loyalty and new referrals.

In the long run, this could cause your business to lose to the competition. The existing promoters might slip into passives and passive customers could convert into detractors.

So, keeping a tab on your NPS score is crucial. In addition to constant monitoring, you must also check whether the NPS score is good or not.

How to know if your NPS® score is good?

Compare with the industry average

Like we said earlier in this blog, NPS® is more of an industry-specific metric. So it makes sense to look at the industry average and where your NPS® stands in relation to that.

It is also recommended to benchmark your NPS® score against that of competitors. This method of relating an NPS® score to the industry average and competitor scores is referred to as the relative method of benchmarking.

For example, in the US, the average NPS® score of Health Insurance is 48. If your business is in the same line, then your NPS® score should ideally be more than 48 or be in this range to be considered a good Net Promoter Score.

Compare with the regional average

If you are a global business, by now it would have been evident how regional differences and cultural values affect consumer decisions.

To cite an example, US customers are willing to pay a premium price for high-end products. Whereas, their Asian counterparts would prefer budget-friendly products that serve the purpose and have reasonable durability.

The same attitude spills over to NPS® survey responses as well. The scores that customers give will be largely influenced by regional practices and cultural beliefs.

As a result, there will be regional imbalances in the NPS® score as well. Hence, the need to benchmark NPS® and compare it on a regional basis.

Without regional benchmarking, you might end up evaluating an average or Good Net Promoter Score® as bad.

NPS® surveys are sent through diverse channels like email, social media, mobile apps, SMS, and so on. The survey response is bound to vary due to various factors.

For example, email surveys usually get high responses since customers find them to be non-intrusive in nature. Also, it is easy to fill up an email survey since it gives enough buffer time for the customer to think and update.

Other channels like SMS and in-app surveys lose out on these. However, they have their own pros and cons which further influence the NPS® scores.

In-app surveys are contextual in nature and hence can drive accurate responses although the response rate could be low.

These differences mean that the business has to populate the NPS® score from various channels and compare them side-by-side to arrive at a benchmark score.

How to obtain a good NPS score?

NPS is a complex metric that differs from industry to industry based on what services you provide or products you sell. Your NPS score will tell you about all the negative and positive experiences of your customers. Though there are several tips to improve your net promoter score, we list down only the most important ones here.

Final verdict: What is a good Net promoter score®?

There are several factors you must consider before assuming your NPS® score to be good or bad. First of all, it is not a percentage, but an absolute value. Secondly, it can vary from industry to industry and from region to region.

The channel through which you got your NPS® survey response will also affect the goodness of your NPS® score.

There is one motivational quote that is quite popular and has been doing its rounds on the internet for a long time — The only person you should try to be better than is the person you were yesterday.

When it comes to evaluating an NPS® score as good or bad, this same quote applies as well. A good Net Promoter Score® score is one that is better than your previous NPS® score.

What is a good average NPS?

NPS score is calculated from -100 to +100. Therefore, any positive value you get is good. To be more specific, any score above 20 is encouraging. The more you get the better it is. (For example, the average NPS score in the financial sector is 35, and ranges up to 60 or above.)

Any positive score is treated as good by some businesses. Whereas, if you take an NPS score of 60, it is excellent and is a very high score in the industry. It means that your customers love your company, and you have a lot of word-of-mouth references.

NPS score is computed from -100 to +100 as an absolute lying number. Therefore, any positive number you get is good. 5 is indeed a good NPS score for businesses. It is worth commenting that you should not stay satisfied with an NPS score of 5, but always push your limits and improve the score.

What is Apple’s NPS score?

Apple has an overall net promoter score of 68. It is worth mentioning that Apple sells different product categories, and each of them has an associated NPS score with it. Apple’s top NPS score is 75 for tablets, and the least is 43 for smartphones.

What is Amazon’s NPS score?

Amazon maintains a pretty good score every year. Amazon is considered one of the best companies in terms of customer loyalty and satisfaction. The NPS score of Amazon is 62 in 2022.

Find out your NPS Score. Create an NPS survey now.